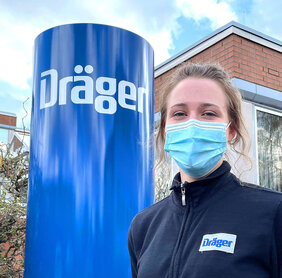 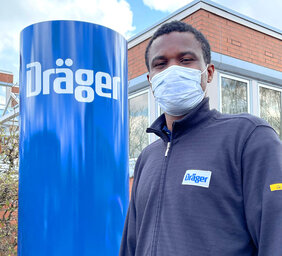 As life goes, Sophia came to her apprenticeship by chance. After her A-levels, she was looking for direction and initially took a job at Dräger MSI as a production assistant. Later, she became aware of the apprenticeship as an electronics technician for devices and systems and simply applied for it: "I was thrilled at how uncomplicated it was. It was the right decision to apply at Dräger MSI. I really enjoy it here and have been able to gain many impressions in Hagen and Lübeck," says Sophia.

It was similar for Obih, he looked at different companies and finally decided on Dräger MSI because it offers good prospects for the future and he thought the team was just great.

Unlike at other companies, some of the training takes place at the Group site in Lübeck and some on site in Hagen. This gives the trainees completely new impressions, and during this time they live in a "trainee flat-share".

Sophia and Obih's training is currently taking place under a very special star: Namely, the Corona pandemic. As a result, everyday life as an apprentice for the two of them has developed in a fundamentally different way than they had imagined.

"Vocational school now takes place online. This makes it very difficult to interact with the other students and I also miss seeing them" says Sophia. And Obih adds: "We also work in shifts to reduce the amount of contact, which works perfectly. It's just unfortunate that we don't see some colleagues as often anymore."

The two also say that even before the online vocational school, school operations had become somewhat more difficult, for example, break times were shifted or the distances between classrooms were increased.

Despite the major changes brought about by this pandemic, the two are mastering their training with flying colours. Sophia is about to write her final thesis, while Obih is currently in his third year of training.

In our next part, we will tell you what a typical day looks like for the two of them.